The finished piece has 10cm x 10cm from the top and is 6cm tall. The size may depend on the used yarn. 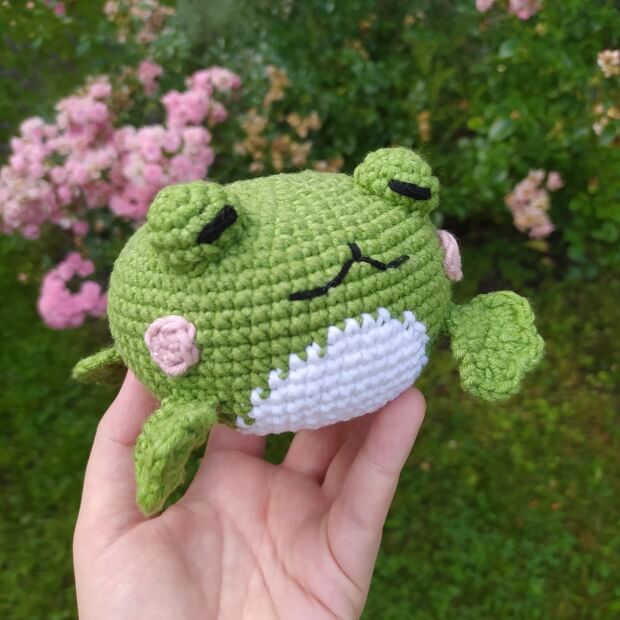 Hi! In this post, I will cover the basics of how to create an awesome Frog! You can also get a PDF file with detailed instructions and pictures from my shop: Frog Pattern

The soft toy is around 10cm x 10cm from the top and 6cm tall. The size may depend on the used yarn.

The pattern is written in American terminology. Crochet in a spiral. For legs, crochet in rows. It is advised to use stitch markers to keep track of your rounds. Crochet through both loops of the stitch unless told otherwise. It would be best if you crochet tightly to avoid holes to be showing while stuffing. Have fun!

In the next round, connect four legs to the body by crocheting through loops of leg and body.

The body is ready! Let’s add eyes, mouth, and cheeks.

start with the pink yarn

Using pins, place eyes and cheeks on the body. Make sure to place them symmetrically according to the white belly. Sew everything together.

To finish off, embroider the mouth with dark yarn. Try to do it symmetrically to the white belly.

And finally, your cutest Frog in the world is ready!
I hope you had fun with this cute amigurumi project. Experiment with different color variations! Maybe add a crown to make him a prince?

I would love to see your finished projects! Use #rustycrochet or @rustycrochet to tag me on Instagram when posting photos. You can also contact me by email at [email protected]. Don’t forget to check out more patterns!

Under no circumstances do not sell this pattern.

Want to be up date with new products? Sign up to newsletter